Image: Architect’s rendering##SkySong, an innovation hub that bills itself as one of the Phoenix metro area’s key economic drivers, has helped spur local plans. 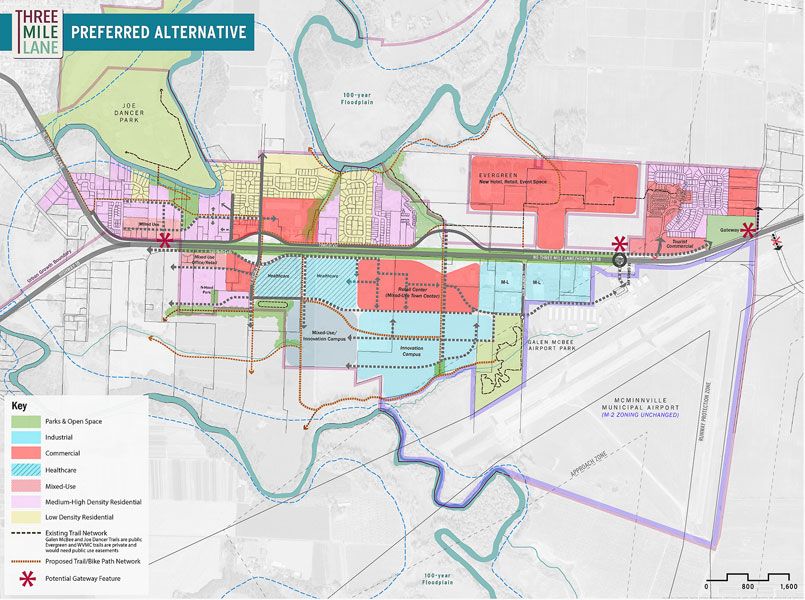 ##The Innovation Center site is in the lightly shaded area in the lower middle on the Three Mile Lane draft site plan shown.

These are exciting times to be a resident of McMinnville.

In 2020, we finally got approval for an expanded urban growth boundary. Earlier this year, McMinnville’s programming advisory committee, known as MacPac, presented its proposal to replace the library, community center and aquatic center, and upgrade the senior center.

Downtown is booming, to the point that it has won several Main Street awards. And the Third Street Improvement Project, designed to improve the look, function and infrastructure of our historic downtown, is progressing.

But what of the hole left by the departure of Hewlett-Packard in 1996, in terms of better-paying technology jobs? We now see movement there as well, in the form of a proposed technology-focused innovation center for industrial lands along Highway 18, where development has long stalled.

This gives us a chance to build on our tradition of the agricultural and manufacturing industry by developing an incubator for entrepreneurial businesses – businesses that will take root and grow here in McMinnville, sharing ideas, technologies and resources on the go. road.

Plans for a major new shopping complex and ensuing concerns about the potential for increased traffic congestion have dominated discussions as the city works on an updated Three Mile Lane plan governing the development of its Highway 18 corridor. However, the Innovation Center component may well turn out to be the crown jewel.

An Innovation Center is a multi-purpose/multi-purpose development where collaboration can take place between startups and their industrial and educational partners, serving to nurture new ideas and technologies. And the concept is already proven in other parts of the country.

Innovation centers can include corporate offices, research and development facilities, cooperative high-tech manufacturing facilities, and even food and service providers designed to conveniently meet the needs of employees. Imagine, if you will, a modern campus for industry that builds on the opportunities of McMinnville’s past, present and future.

Centers can take on forms as unique as the communities they inhabit. An example is SkySong, the Scottsdale Innovation Center at Arizona State University, which is described this way on its website:

The sky really is the limit for what could take place at the proposed innovation center here.

First, we have the right land – a 180-acre parcel already zoned industrial. In fact, it is one of the largest contiguous flat industrial lands in the state.

Its location along a highway, next to an airport, and on the edge of a growing, award-winning community makes it nearly perfect.

Highway 18 is designated both a freight route and a freeway, and that designation will not change as a result of this development.

The Oregon Department of Transportation has a three-stage plan for the McMinnville Highway 18 Corridor to ensure that as traffic increases, its dual designation is protected and maintained. Currently, we are still in the first stage.

But that’s been lacking since HP left our community. Despite the existence of some innovative high-tech companies, our economy remains mainly based on agriculture and tourism.

McMinnville remains well below the state median for household income. It is a natural outgrowth of a community oriented towards agriculture, tourism and retirement life.

Third, it embodies a vision for the future of our community.

This vision began about 2.5 years ago by Scott Cooper, then Executive Director of the McMinnville Economic Development Partnership. One element was the airport, which he saw as not reaching its full potential for the city and region.

One of my first roles as a city councilor was serving on the McMinnville Economic Vitality Leadership Council as City Government Liaison and Vice President. Cooper had just been hired by the city of Scottsdale, Arizona as a commercial attraction manager, and I attended his last meetings with MEVLC before he left for a warmer climate.

During these meetings, he described his vision for economic development at the airport and along the adjacent Highway 18. It helped me see clearly what could happen there.

I become passionate when I think of the potential. In fact, I believe Cooper has barely scratched the surface of what could ultimately be accomplished for the city, county, state, and industrial sector of our economy through the airport and innovation center.

At the regional level, the Strategic Economic Development Corporation, known as SEDCOR, has become an active partner. A year ago, the state began discussing the need for five to six innovation hubs, opening up an opportunity in McMinnville not to be missed.

To that end, the state has developed a 10-year Innovation Strategy, designed to expand the concept across the state. Wouldn’t it be wonderful to see McMinnville come downstairs?

Fourth, this land will develop with or without planning, direction and management. But we have a window of opportunity to play a meaningful role in shaping it to best meet the needs of the city, both for today and for generations to come.

The land sits within the city limits, has immediate airport and highway access, and already has the appropriate industrial zoning. It is primarily owned by two groups, both of which support the innovation hub concept and the underlying community vision.

The choice we face is between sitting back and letting this land develop piecemeal, without input, or trying to influence it in a direction that can accommodate a long-term sustainable industrial campus.

Yes, a portion of 40 acres is being considered for commercial rather than industrial development.

However, we need it to provide services to residents of our growing community and help pay for the infrastructure needed to support the Innovation Hub. Additionally, this leaves up to 140 acres still available to initiate local industrial development.

Wouldn’t we be better served by a carefully designed innovation center than by haphazard development outside of our sphere of influence – 140 acres of industrial land that is proactively planned to create and nurture entrepreneurial industrial businesses at McMinnville, providing great jobs for our community?

What will McMinnville look like in 40 years? I know it has changed dramatically since I arrived 40 years ago when its population was 15,000.

Will McMinnville still be the same vibrant and growing community in 2062 as it is today?

It is up to us to lay the foundations of this vision. This includes well-paying future jobs, so people can work, live and raise their families in the same city, as past generations could.

Let’s work together to help guide economic development here for our community, our children and our grandchildren.

Guest writer Chris Chenoweth was elected to a four-year term on the McMinnville City Council in 2020. He owns Acupro Oregon, an IT sales and services company. In addition to his board and corporate interests, he has been active with the McMinnville Area Chamber of Commerce and Abundant Life Pentecostal Church. A graduate of McMinnville Schools and a resident of McMinnville for 35 years, he is raising a family here with his wife, Kamie.